Ambient Conditions: the conditions (pressure, temperature, etc.) of the medium surrounding the case of the transducer

Atmospheric Pressure: pressure of the atmosphere at Earth's surface

BAR: Unit of pressure (or stress)

Bourdon Tube: an early, mechanical pressure gauge consisting of a flattened tube that tends to straighten under internal pressure

Burst Pressure: the maximum pressure that may be applied to the positive pressure port without rupturing the sensing element

Capacitive Sensing: detection and measurement of pressure through the change in voltage across a capacitor, one plate of which is a diaphragm which deflects slightly which changes in applied pressure

Excitation: the external electrical voltage and/or current applied to a transducer for its proper operation

FS (Full Span or Full Scale): the range of measured values over which a transducer is intended to measure, specified by the upper and lower limits 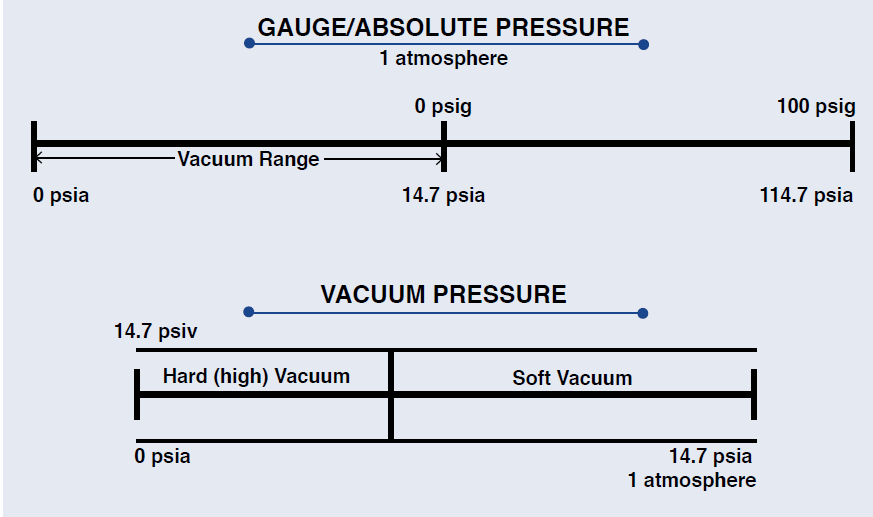 Hysteresis: the maximum difference in output, at any measured value within the specified range, when the value is approached first when increasing and then decreasing pressure

Linearity: the maximum deviation of any calibration point on a specified straight line, during any one calibration cycle

Long Term Stability: the ability of a transducer to reproduce output readings obtained during its original calibration at room conditions for a specified period of time, usually one year

Newton (N): the unit of force in the International System of Units (SI)

Pascal (Pa): the standard unit of pressure (or stress) in the SI system

Position Effect: gravity effect on the output of a transducer when mounted with the diaphragm in different orientation than when it was calibrated

Pressure Transducer: an electromechanical device for translating fluid pressure valves into voltages across a high-impedance (5k ohms or greater) load

Pressure Transmitter: an electromechanical device for translating fluid pressure values into currents (generally 4 to 20 mA) in a low-impedance load

Proof Pressure: the maximum pressure that may be applied without changing performance beyond specifications (typically 0.5% FS zero shift)

Range: the spread between the maximum and minimum pressure between which the transducer has been designed to operate

Repeatability: the ability to reproduce output readings when the same pressure value is applied consecutively, under the same conditions, and in the same direction

Response Time: the length of time required for the output to rise to a specified percentage of its final value as a result of a step change in pressure

RSS Accuracy: the root sum of the squares

Setraceram™: a patented ceramic/glass sensing element used by Setra in barometric transducers and instruments requiring the highest degree of measurement precision and stability

Span: the algebraic difference between the limits of the range

Thermal Error: the maximum change in output, at any pressure value within the specified range, when the temperature is changed from room temperature to specified temperature extremes

Thermal Zero Shift: the zero shift due to changes of the ambient temperature from room temperature to the specified limits of the operating temperature range

Vacuum: generally refers to pressures between 0 and atmospheric

Did this answer your question? Thanks for the feedback There was a problem submitting your feedback. Please try again later.
Last updated on October 24, 2019